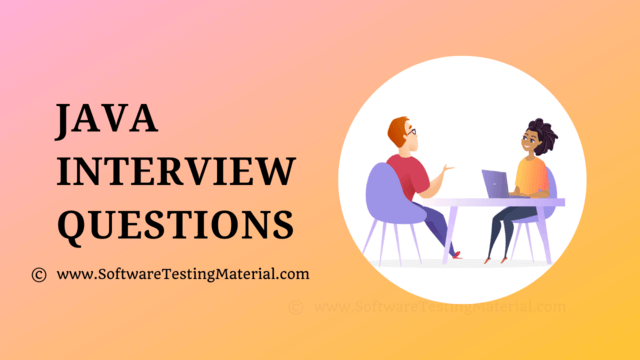 Let’s move on and see this comprehensive list of the most important and commonly asked basic and advanced Java programming Interview Questions with answers.

When you start learning Java, the first method you encounter is public static void main(String [] args). The starting point of any Java Program is the main() method. It is one of the important methods of Java. Technically, the main method is the starting point where the Java program starts its execution. JVM always look for this method signature to start running an application. Check this to know detailed explanation.

Java is a programming language and computing platform first released by Sun Microsystems in 1995. There are lots of applications and websites that will not work unless you have Java installed, and more are created every day. Java is fast, secure, and reliable. From laptops to datacenters, game consoles to scientific supercomputers, cell phones to the Internet, Java is everywhere!

3. Mention some features of Java?

Some of the features which play an important role in the popularity of java are as follows:

There is a difference between Object Oriented Languages and Object Based languages.

6. What is the difference between Declaration and Definition in Java?

Definition: If you define how a class or method/function or variable is implemented then it is called definition in Java.

When we create an interface or abstract class, we simply declare a method/function but not define it.

For a clear understanding, check the below image

An object is an instance of a class. Objects have state (variables) and behavior (methods).

Example: A dog is an object of Animal class. The dog has its states such as color, name, breed, and behaviors such as barking, eating, wagging her tail.

A class can be defined as a collection of objects. It is the blueprint or template that describes the state and behavior of an object.

12. What is Constructor in Java?

Constructor in Java is used in the creation of an Object that is an instance of a Class. The constructor name should be the same as the class name. It looks like a method but it’s not a method. It won’t return any value. We have seen that methods may return a value. If there is no constructor in a class, then the compiler automatically creates a default constructor.

13. What is Local Variable and Instance Variable?

It can be accessible only inside a block, function, or constructor.

An instance variable is a variable that is declared inside a Class but outside a Method. We don’t declare this variable as Static because these variables are non-static variables.

It can be accessible by all the methods in the class.

14. What are the OOPs concepts?

15. What is Inheritance in Java?

Inheritance is a process where one class inherits the properties (methods & fields) of another class. Read more here

Polymorphism allows us to perform a task in multiple ways. Let’s break the word Polymorphism and see it, ‘Poly’ means ‘Many’ and ‘Morphos’ means ‘Shapes’. Read more here

Assume we have four students and we asked them to draw a shape. All the four may draw different shapes like Circle, Triangle, and Rectangle.

17. What are the types of Polymorphism?

There are two types of Polymorphism in Java

18. What is Method Overloading?

There are three ways to overload a method.

19. What is Method Overriding?

Declaring a method in child class that is already present in the parent class is called Method Overriding.

In simple words, overriding means to override the functionality of an existing method.

20. What is Abstraction in Java?

A layman who is using a mobile phone doesn’t know how it works internally but he can make phone calls.

21. What is Abstract Class in Java?

We can easily identify whether a class is an abstract class or not. A class that contains abstract keyword in its declaration then it is an Abstract Class.

22. What is Abstract Method?

An abstract method is a method that is declared without an implementation (without braces, and followed by a semicolon), like this:

In order to use an abstract method, you need to override that method in sub class.

23. What is Interface in Java?

24. What is Encapsulation in Java?

26. Why are strings immutable in Java?

In Java, String is immutable to make sure that the string value doesn’t change. String literals are usually shared between multiple clients. If the value of the string changes (from “STM” to “stm”), it will affect all reference variables and cause severe discrepancies.
Hence, strings are immutable in Java. Making string immutable enhances security, caching, synchronization, and performance of the application.

27. What is the difference between equals() method and double equal operator (==) in Java?

28. How to convert Integer to String in Java?

29. How to convert String to Integer in Java?

30. How to convert Char to Integer in Java?

31. Write a program to print the pattern given below


32. Write a program to print the pattern given below (Left Triangle Star Pattern)


33. Write a program to print the pattern given below (Right Triangle Star Pattern)


34. Write a program to print the pattern given below (Pyramid Star Pattern)


35. Write a program to print Fibonacci Series up to count 10.

Another method:
Check this for other methods we use to reverse a String in Java

37. How To Find The Largest Value From The Given Array.

39. How to display all the prime numbers between 1 and n (n is the number, get the input from user)

40. How to find the given number is a prime number or not by getting input from the user

We can read a file line by line in Java in two ways.

BufferedReader Class belongs to java.io package and it provides readLine() method to read a file line by line in Java.

43. Difference between Array and ArrayList?

44. Difference between ArrayList and HashSet in Java?

Learn more on Array and ArrayList with sample programs

45. What are the different access modifiers available in Java?

Access modifiers are subdivided into four types such as Default, Public, Private, Protected

private: The scope of private access modifier is only within the classes.

Note: Class or Interface cannot be declared as private

protected: The scope of protected access modifier is within a package and also outside the package through inheritance only.

public: The scope of public access modifier is everywhere. It has no restrictions. Data members, methods and classes that declared public can be accessed from anywhere.

To know more about this you have to go through Method Overloading and Method Overriding.

47. Difference between Abstract Class and Interface?

48. What is Multiple Inheritance?

49. What are the differences between throw and throws in Java?